Hello, we are Urban Industrial Imaging, Frank Villafañe and Rose Rios, a New Jersey based husband and wife photography team. We’ve been shooting Nikon full-frame cameras professionally for the past 4+ years but have recently been experimenting with mirrorless cameras in our business.

Most of what we shoot would be considered architectural/real estate: residential and commercial, and industrial photography. Our clients include Rutgers University, New Brunswick Development Corporation (DEVCO), Johnson & Johnson, Conde Nast Traveler, and a growing number of local as well as national clientele.

When we began to read all of the hype surrounding mirrorless cameras, and how many full-frame DSLR photographers were defecting to the small(er) format, we decided to take a critical look to see if they could provide any benefit to our style of shooting.

Most importantly, we needed to know if the mirrorless format would be of any use to our clientele. At a minimum, it should produce image quality reasonably close to the that of the DSLR – at least, it should be indistinguishable to the discerning eye. Pixel-peepers excluded, of course.

As already stated, our main style of photography is architectural/industrial, although we do shoot many events as well as portraiture. See below: 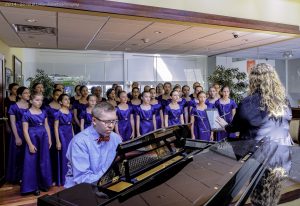 This shot shows the New Brunswick All Girl Choir performing at a toast for ex-NJ Governor, James Florio. 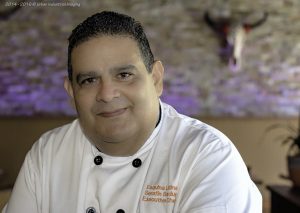 Speaking of events and portraiture, the current mirrorless offerings seem to be tailor-made for these styles of photography, and indeed, offer significant advantages over their DSLR counterparts, such as:

From that standpoint alone, mirrorless cameras DO provide an edge and probably should be included in every photographer’s camera bag. So how did we plan our quest and what did we discover?

This is a shot of a few swimmers taking a dip in the Atlantic Club pool.

We chose our gear and split up. The place was very well lit, so we didn’t need any additional lighting to slow us down.

I took the heavy gear and concentrated on all of the wide-angle shots, while my wife took the mirrorless cameras… fast and light. We covered the entire gym in just over 1 hour. We presented the client with 25 distinct images, all of which were accepted with great enthusiasm.

Well, we were pretty excited with the results and decided to pursue this idea further, the possibilities seemed endless…

Our best client, DEVCO, wanted to update some images we had shot for them two years earlier, so we employed our technique of shooting with both the DSLR and mirrorless cameras, but this time we synchronized our shots.

Their project involved updating a business at the base of a parking garage that they had built. The original vendor, Fresh Grocer, closed and the new tenant, Key Food, remodeled the location. The client requested images of the current version of the completed changes.

We set up our tripods and photographed two versions of the newly renovated site, with both cameras situated next to each other. Below is the original with the two updated versions flanking each side.

We couldn’t escape the inherent differences in the cameras and the lenses chosen, nor could we both occupy the same space, so there were some minor differences as to position and color. For the most part we chose the same ISO, aperture and shutter speed where possible, firing each shutter simultaneously to minimize any differences.

Which did the client choose? The DSLR version, but it was very close: they loved the color and look of the mirrorless image, but wanted the slightly better detailed resolution of the DSLR image.

By now, flush with our success, we began to shoot both DSLR’s and mirrorless side-by-side whenever the opportunity arose. But exactly which mirrorless cameras did we use? Well, we tried quite a few before settling on our current choice.

As mentioned earlier, we did employ both the Fujifilm XT-1 as well as the Olympus OMD EM1 on our first tandem shoot. We also tried out, in no specific order, the following on a variety of different client shoots, as well as personal projects:

What is ironic is that we’ve licensed images with virtually all of the cameras mentioned, the lone exception being the OMD EM10.

The following photographs are DSLR and mirrorless images side by side. We leave it as an exercise to the reader to determine which is which ;)

The final pair of images below were taken at the same session with our current choice of cameras:

Two images of Frog and The Peach

With the results we’re getting, we will continue to employ mirrorless cameras in all of our projects. In fact, they now occupy a permanent place in our camera bag(s).

All this begs the question: why not dispense with the DSLR and just shoot mirrorless, as many have done already? We honestly thought about it… but decided to use both for the strengths each provides.

Furthermore, we’re not exactly ready to ditch the DSLR… at least not yet. We prefer to wait and see how the mirrorless market matures. We do believe the day will come when mirrorless cameras will eventually supplant the DSLR – but NOT today.

Update: That may occur sooner than expected… look for MAJOR changes in the mirrorless world this September at Photokina!

So which is our mirrorless camera of choice? The Olympus PEN-F! It is small, fast, responsive with very good detail resolution (20MP), and a wide choice of outstanding lenses, which have served to bolster our decision.

We feel that with these options we can cover just about any client/personal needs, and then some.  The best of both worlds.

Now, as promised: the EXIF data for all of the images, in order. Mirrorless is displayed in BLUE text.

Like our work?  You can view more at our current website, Urban Industrial Imaging. All of our current mirrorless work can be viewed at our 500px gallery, Sin Espejo (Mirrorless).  Also, please visit our Facebook and Instagram pages and “like” away!  Thanks for reading and we hope you enjoyed this little article.

Finally, a big “thank you” and tip-o-the-hat to our mentor and fellow shooter, Mike Newton and Hacking Photography! Thanks for hosting this “guest post”!