Don’t call it a comeback: film is experiencing a resurgence. The industry that died almost overnight in the late 90’s is roaring back, with vintage lenses popping up on eBay and 35mm film prices increasing weekly on Amazon.

There’s just something about analog photography that is more engaging — more personal — than digital.

Only just recently did I decide that I wanted to start shooting film; right after that I realized I had no idea where to start. I wrote this article to describe some of my own experiences and hopefully save you some time if you find yourself heading down a similar path. 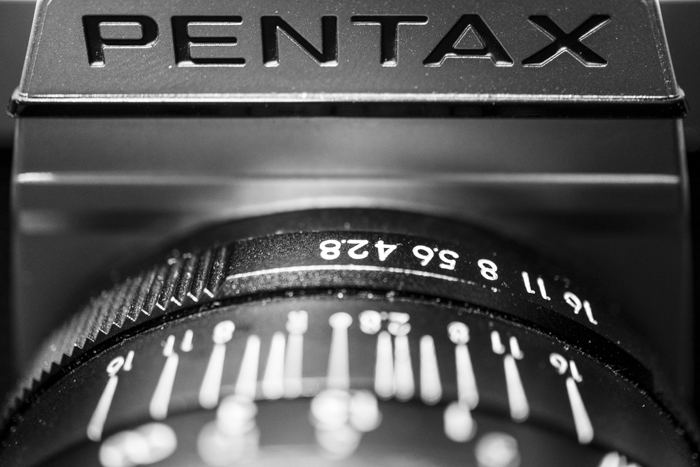 I found that if you’re thinking about shooting with film, there are actually only a few things you need, and you can do it without breaking the bank! 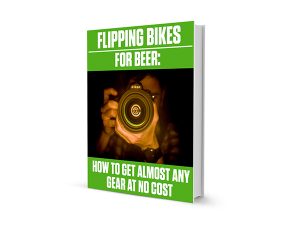 I started doing some research, and realized that it’s possible to score some seriously cool cameras on eBay, Amazon, or Craigslist. Many times, these are attic/basement finds and are in near mint-condition.

Often, the seller isn’t really sure what they have and just want to flip it for some quick cash.

[Mike here: if you want to learn how to buy gear for super cheap and even sell it later at a profit, check out my ebook ‘Flipping Bikes for Beer’ (you’ll get the title when you read it) that is included in my eBook collection.

There is no way this doesn’t work out well for you: if the seller is a “camera person,” then you’re likely getting a fair price for an item in good condition. If they aren’t, you’re getting an amazing deal on a nice piece of vintage equipment, or something you can flip for parts/repairs for close to the price you paid.

You can read up on specific models, years of production, and things to look for or avoid on CameraPedia.

Eventually, I settled on a Pentax K1000 as my first film camera. I paid a little more than $80 on Amazon for the body and a 50mm lens (the ubiquitous “nifty fifty”). 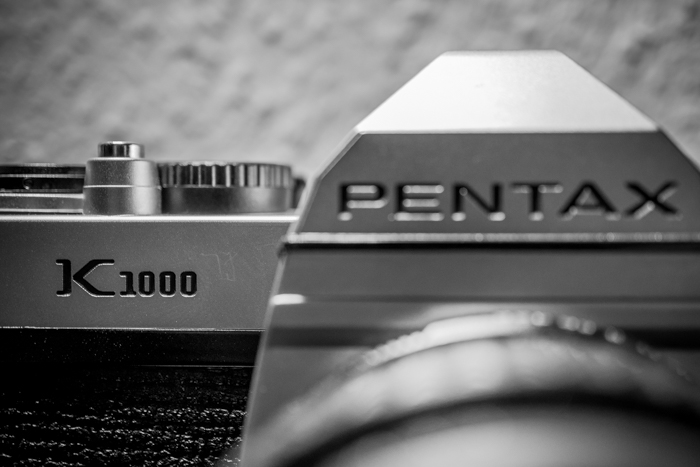 [Note: This was on the higher end of the price range I found, but it had detailed pictures of the item and descriptions written by someone who clearly knew their stuff. I also found a lot of bodies without lenses for considerably less.]

I went with the Pentax K1000 because they enjoy a great reputation on internet forums. Lauded for being dependable workhorses, they’re incredibly basic in their feature set and are entirely mechanical.

They do take a small button battery to run the integrated light meter, but the battery is not required to operate the camera. The runners up were an Olympus OM-10, Nikon F3, and Canon AE-1. 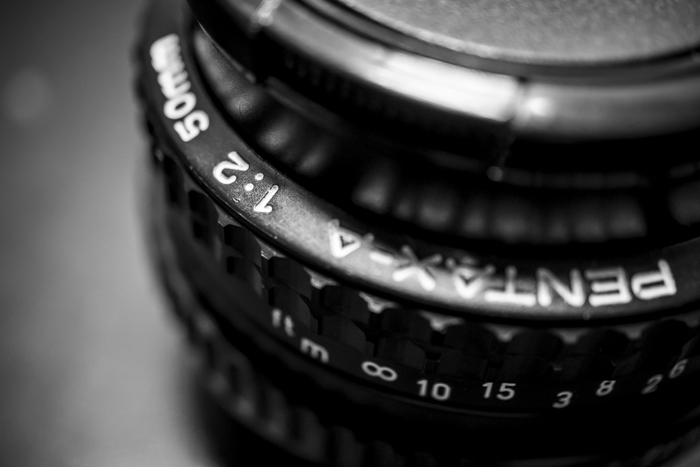 My K1000 came with a 50mm lens, but if you decide to buy your body and lens a la carte, make sure the lens is compatible with your body. If you’re not able to inspect the lens in person, make double-sure.

(A few keywords you want to look for in eBay listings are “no fungus or mold,” “no oil on aperture blades,” and especially, “no scratches.”)

Your first roll of film

I read as much as I could, and eventually decided to buy some Kodak Tri-X and Ilford HP5 (you can get this on Amazon or B&H in the US, or MacoDirect if you’re in Europe). 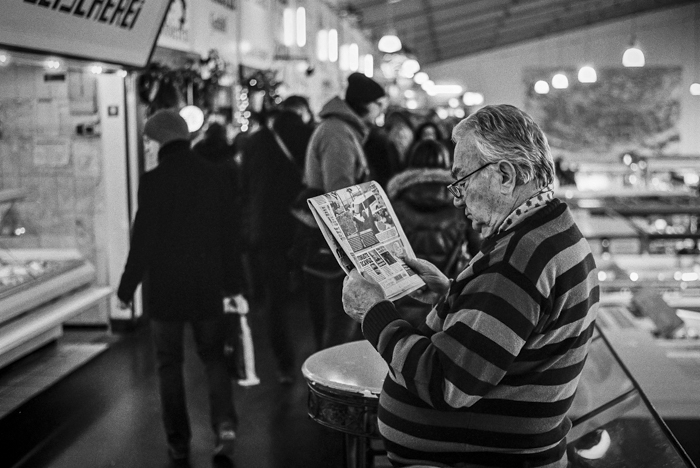 These two brands are in current production, and most film labs know how to develop them in standard processes (read: I didn’t want my first roll to get destroyed at Walmart because it was some goofy limited run with specific development instructions).

Average price/roll is around $5 as of the time of this writing. I figured I’d shoot a roll or two of both and see which prints I liked better. (Spoiler: The HP5 won for greater tonal range and a softer contrast, but that’s another article.)

If you’re more interested in color film, you can find Fuji Superia in Walmarts, Walgreens, and CVS across the US. Average price at the time of publishing is about $2.50/roll, with higher ISOs being slightly more expensive.

An excellent choice for accurate skin tones is Kodak’s Portra 400, but it’s pricier and you’ll need to order it online or at a specialty camera store. 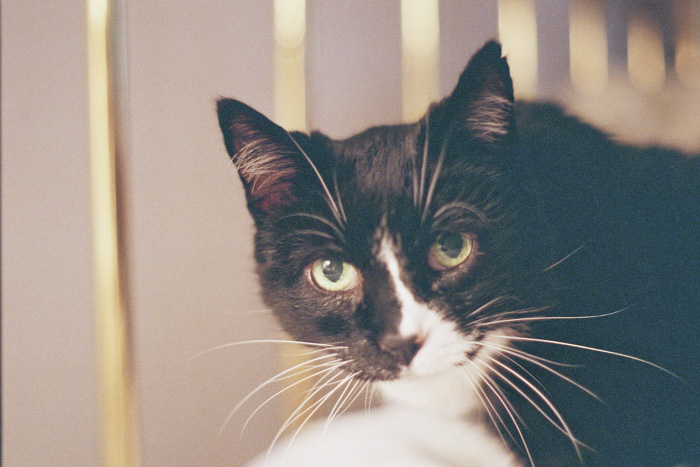 My mom’s cat. It’s not a fantastic shot from a technical standpoint, but it shows my camera has no light leaks.

Note: I would strongly recommend running an inexpensive roll through your new camera body just to see if there are any light leaks or sticky shutter issues. There is no point going hog-wild buying up film if your camera is going to destroy every roll.

Somewhere to develop and/or scan your film

I realized that my previous experience with film consisted of “take it to Walgreens and come back in a few days to get the pictures.” That was an assumption that remained unchanged since my grade-school years.

I had do some serious YouTube crash courses to learn what all developing entailed. After I did that, I realized that the first few rolls I shot would be developed by someone else, in a professional lab.

Once your negatives are developed, you can optionally have them scanned or get prints made. I again realized that operating my own scanner and making sure that all my negatives were dust-free was far too time-consuming. I decided to have the same lab that developed my negatives scan them for me as well.

Let’s tally up our kit so far:

Development and scanning at a local film lab: $14.00

As you can see, this comes in right under $100! So there you have it — you’ve just shot and developed a roll of film, and have digital scans to share on social media. What comes next? Well, that’s up to you. 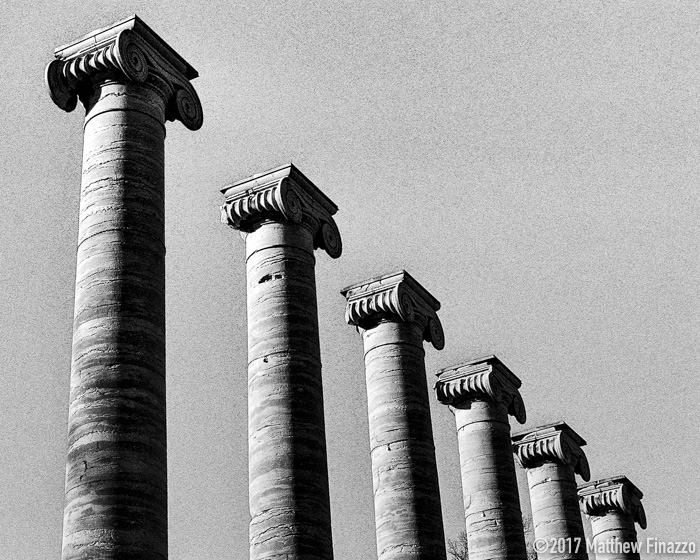 The columns at the University of Missouri. Kodak Tri-X 400, scanned to TIFF and edited in Lightroom CC.

You might decide that shooting film is too much trouble or that development and printing costs too much or that it’s the greatest thing ever.  My only request would be to make voodoo dolls of Mike instead of me if you find you’re spending all your Starbucks money (ok, fine, beer money) on rolls of film. This is his blog, after all. ;)

In a future article, I’ll discuss in greater detail what to do with all your film once you’ve shot and developed it. I’ll also show you some additional accessories for your new film kit that have the potential to really let your creativity run wild!

If you aren’t quite ready to build a film camera but still want to get the interesting colors that come from color film photography in your digital photography, check out the Hacking Photography Old School Colors Lightroom presets.

These presets were created to try and simulate the nice soft colors and tones that film produced.

Click the image below to see more examples of how they work. 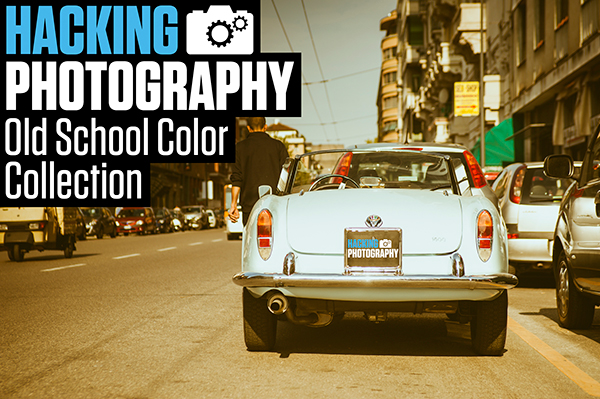